Hero of the Month – Total Civil 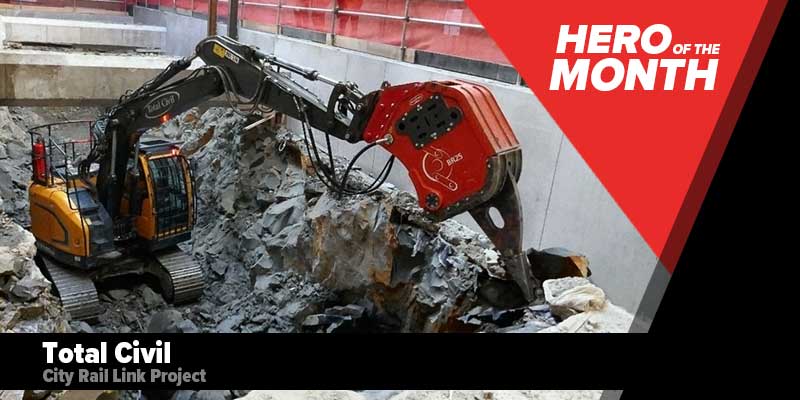 Posted at 13:27h in Featured, Other Attachments by Robyn Fletcher

One of New Zealand’s most ambitious transport infrastructure projects – the City Rail Link – has been underway since 2019, however much of the progress has been underground, out of sight of the general public. Working underground to create new stations and tunnels and connections to existing train lines is no small feat, as we discovered when talking with Andy Lawrence, Site Manager for Total Civil Ltd.

Total Civil have been working on the new Karangahape station site, on a ‘ground down’ dig, where they dig down from ground level, then pour a floor and then dig down again. And when you are digging 30m deep, it’s a long way down, and there’s a lot of soil, rock and sandstone to get through.

Working in a heavily populated area, the Total Civil team were conscious of the noise and disturbance of their neighbours. Andy had seen Vibro Rippers in action previously in Australia and thought they could be just what was needed on this job, as they produce less noise and vibration than a rock breaker.

Being able to hire a Vibro Ripper from Robur Hire, the team were able to test them on the job and they were “hugely impressed by how well the Vibro Ripper performed with very little noise – they annihilated the sandstone” says Andy. They considered purchasing a Vibro Ripper, however the ability to hire it for the length of the job, and then return it once done made hiring a more commercially sensible option. As Andy commented “It eliminated the worry of what you do with these specialist attachments at the end of the job”. In addition, the team were easily able to scale up the work and hire additional Vibro Rippers so they could have more diggers in action at each end of the new underground station.

However, the main benefit of hiring the Vibro Ripper was the service and support received from the team at Robur Hire. “Grant was excellent to deal with, and the support we received over the year has been fantastic” says Andy. “At the start of the job, Robur Hire came onsite to understand the requirements, and when they delivered the Vibro Ripper to site they gave advice and support on setting up the attachment and hose flow settings”. Being 30m underground also created challenges with maintenance and servicing, however Andy added “Grant from Robur Hire was always available to answer any questions, and to help fix any issues that cropped up”.

Now that the current job is wrapping up, would the Total Civil team consider using Robur Hire again for future jobs? “Yeah, we’d definitely use Robur Hire again. The attachments perform well, the service is great, and the Robur Hire team regularly follow up to ensure the process is easy”.